I guess I  have to admit that I love deconstructing music from the past. I first fell in love with the idea when I heard Stravinsky do it to Pergolesi, then Zappa to Stravinsky then Berio to Mahler - the list goes on. Basically, when I hear a piece of music I love, I want to do something with it, to it, own it in some way. It's a natural reflex I always had. But just performing it is not enough, as a composer, I want to put my own stamp on it. I guess they call this postmodernism, a term I don’t like, since its more of a comment on modernism then on what composers and artists were doing in the late 20th century. If it's not mid-century “modern” sounding then its something else - I think that's dumb. But I don’t really care for any terms really, so if it was called Deconstructionism or Reinterpretation-ism or whatever - I probably would have still said it's dumb.

Let's get to the basics.
I love a piece of music from the past.
+ It is not enough for me to just perform it as is since I am a composer and want to do more with/to it.
+ I am influenced by many musical cultures, genres, styles, traditions and I want to experiment with how this piece of music I love, would sound if it was seen through one (or more) of those cultures, traditions.
= Thus I write my own interpretation of this music. Using various methods such as Deconstructing it, reharmonizing it, reimagining it in various ways, putting it through various genres, combining it with elements as far removed from the original as possible, etc.
Simple!

I feel like there are people out there who do not understand this simple principle, and think a composer like myself, is writing and reinterpreting older music for other reasons than purely musical. I state here that the only reason I do it is the reason I write all of my music. I WANT TO HEAR WHAT THIS SOUNDS LIKE!  And since no one has done it, I will.
Again Simple!

I will show below 3 examples of my compositions that deconstruct older pieces of music that I love.

I do many things with older compositions in various pieces, but with these three examples, I will focus on Deconstructing them. Meaning taking short melodies, rhythms, motifs, etc. out of the full piece and grooving on them, remake them in some way. Or, taking a longer melody and changing it just enough so you can recognize it yet also hear what the change is. I will discuss other techniques within the three pieces listed below.

1. Igor Stravinsky’s ‘Rite of Spring
- Deconstructed by me in: ‘Rite Through An Eclectic Spectrum’  - Movement #1 “introduction’
‘The Rite of Spring’ by Igor Stravinsky was a big influence on me, and I always wanted to “do” something with it. I got my chance when on the 100th anniversary of its premiere I decided to write an 8 movement composition for my band Sound Liberation based on this music and give it a descriptive title (descriptive to what I am doing with it): ‘Rite Through An Eclectic Spectrum’. Since everything seen through my mind becomes eclectic, the title really defines what I am doing with this music.
In the first movement, titled ‘Introduction’,  I take the famous opening bassoon melody, and various other short motifs that follow it, and assign these to the various instruments to be used as ostinatos, over which we improvise. The ostinatos form an interesting tapestry of strange rhythms and are supported by an African inspired groove played by the drums and percussion.

Here is the first page of my score: 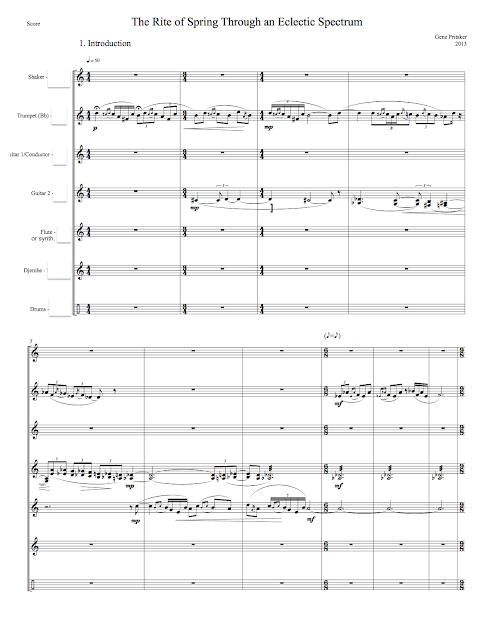 Here is a link to the original Rite Of Spring Introduction:

Here is a link to ‘Introduction’ from my ‘Rite Through An Eclectic Spectrum’:

My piano concerto ‘Reinventions’ takes six Bach inventions and in 5 movements uses this music to create a brand new extremely eclectic composition. In movement 5, Bach’s F major Invention goes to the middle east. The idea was: how does this major scale melody sound if the scale used is something very different. The piece starts with a groove on the F Phrygian scale then the original major melody is suddenly stated. The piece goes on with alternating 4 bars of the melody in its original major scale with the repetition of the same 4 bars of that melody as it would sound in the Phrygian mode. Of course, the orchestration, textures, and rhythms reflect the sound of the melody. The piece goes on to develop beyond the Back melody but brings the melody back toward the end in a crazy syncopated 9/8 groove.

Here is the link to the full score of movement 5:
SCORE

Here is a link to ‘Movement #5’ form my piano concerto ‘Reinvention’
Performed by Simone Dinnerstein - piano, Absolute Ensemble with Kristjan Jarvi conducting at the 2013 BachFest in Leipzig, Germany:

3. Anton Webern’s ‘5 Movements for String Quartet op. 5’
- Deconstructed by me in: 'Variation on the First & Last Bars of Webern's Opus 5'

The last piece I will talk about is self-explanatory. I took the first bar and the last bar from Webern’s string quartet and deconstructed this music for 3 pianos (yes you heard it right, 3 of ‘em) to make a brand new composition. Mostly I took fragments of these bars and created new textures and grooves our of them, adding new melodic material around this music and making it “My own”. Out of context from the string quartet, these bars take on a life of their own, and in my development get completely transformed musically. Aside from the title, you would not think ‘Webern’ so much when hearing my full composition. Though I'm curious to hear what people do perceive, so feel free to share your thoughts.

Here is the first bar of the original Webern: 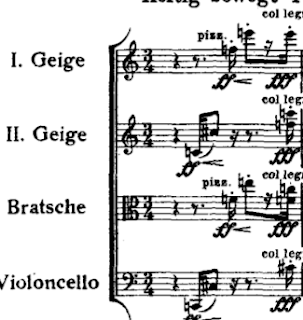 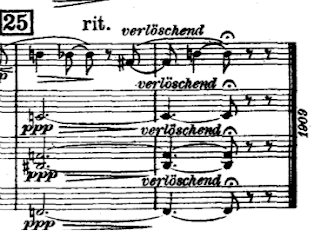 Here is the video to the original (with score):

Here is the link to my score:
SCORE